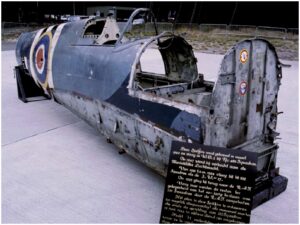 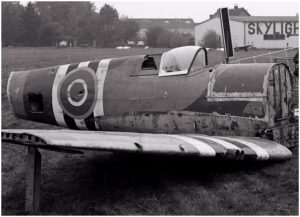 The legendary Spitfire is without any doubt one of the most beautiful propeller-driven aircraft of the Second World War. Although the Dutch Spitfires had clipped wing-tips instead of the more elegant elliptical wing planform, it is the shapely lines of the single-seat fighter that make the heart of any aviation enthusiast beat faster. The Spitfire was designed by R.J.Mitchell as early as 1934. He was a brilliant aircraft designer who unfortunately died at the age of 42. The prototype made its maiden flight in 1936 and was powered by a 990-hp Merlin engine driving a two-blade propeller. Our Mk.IX has a 1720-hp Rolls-Royce Packard Merlin 224 engine and a four-blade propeller. In all, 20,351 Spitfires have been built. All of the 56 Spitfires that served in the Dutch Air Force were Mark IXs.

The SKHV Spit was built in 1943 and took part in the D-day fighting. In 1946, the 322 Fighter Section (322 JaVA) was established, which in 1947 was renamed 322 Squadron, and which included our Spit as H-25. After its return from the East Indies, 322 Squadron adopted the role of a “monthly” squadron. In that period the H-registration was replaced by the 322 Squadron code (3W) followed by a serial number, our Spit becoming 3W-17. 1953 saw the end of the military career of this legendary aircraft. The greater part of the Spitfires came to a sorry end, being plundered by souvenir hunters and scrap dealers, or being burned in fire-fighting exercises.

The B-25 Mitchell is a medium bomber that was developed by the u.s. Army at the end of the 1930s. Just like in our country, there was no separate air force formally. What we now call air force was called at the time, US Army Air Corps, and later US Army Air Force.

March 1939 the US Army Air Corpscontacted the American aviation industry to develop a medium bomber. That was supposed to be able to transport a load of 3,000 pound over a distance of at least 2,000 miles. The motor had to be the State-of-the-art Pratt & Whitney or Wright radial piston engines. The manufacturers Martin, Douglas, Stearman and North American delevered their design, the choice fell on the NAA design. The prototype flew on 19 August 1940 as the first of a total production of 9.889 aircraft.

The Mitchell was named after the American General Billy Mitchell who shortly after the first world war held demands for forming a separate air force. He was vilified because of his views, and had to leave the service involuntarily but got posthumous rehabilitation.

The first great feats of the Mitchell was the Tokyo Raid. After the Japanese attack on Pearl Harbor in december 1941 the us was involved in the war. General Jimmy Doolittle formed a formation of Mitchell bombers to perform an attack on targets in Japan. The aircraft were launched from an aircraft carrier in the Pacific.

The Mitchell served on many fronts during the second world war. The Dutch Government was the first foreign recipient of the bomber. The unit was ordered to go to the ML KNIL, the Dutch military aviation Division of the Royal Indian army. In addition the Mitchell was bought or leased for use in the 320 [Dutch] Squadron of the Royal Air Force. After the war the Mitchell did service in India during the police actions. Most aircraft were turned over to the Indonesian air force. In our country the Mitchell was still in active duty untill 1954 by the Naval Aviation 320Sq. The Squadron was closed down in 2005. The airplane especially acts as a Search-And-Rescue plane, during the big flood disaster of February 1953.

Our Mitchell was purchased in 1989 by some individuals. of SKHV. After the flight to Netherlands in May 1990 crossing to the aircraft was the flagship of the DBAF/Duke of Brabant Air Force. After a few years the aircraft was bought by DBAF. The registration N320SQ keeps the memory of the Dutch aircrews alive. At the request of the Royal Air Force the veteran bomber was added to the SKHV fleet in 2004 at the start of the integration between SKHV and DBAF.

In the Dutch East Indies the Ryan STM trainer was used for the training of candidate pilots. Between December 1940 and March 1942 these aircraft served as trainers with the Military Aviation department of the Royal Dutch East Indies Army and with the Naval Air Service. Altogether 108 Ryan STMs have seen service for the Netherlands. Shortly before the Japanese invasion, the MLD ordered thirty-six Ryans to be shipped to Australia, our S-16 being one of them. In Australia they contributed to the war effort against the Japanese.

Our fliers in the Far East received their initial instruction on the Ryan, then switching to bombers and fighters. Fantastic stories about our Ryans in the Dutch East Indies are in circulation. The instructors soon realized that some reconnaissance work could easily be included in the training sorties. This resulted on several occasions in clashes between Ryans and Japanese aircraft. One Dutch pilot spent 25 minutes in a dogfight with a Japanese fighter, which did not succeed in downing the slower but very manoeuvrable Ryan. In a similar confrontation, a Javanese pilot dived his Ryan on top of a Japanese Zero, both planes crashing and the two pilots perishing.

Our Ryan is one of the last flying examples that flew the Dutch flag. She is powered by a 150-hp four-cylinder air-cooled Menasco in-line engine giving her a maximum speed of 256 km/h, with a 560-km range. After the war our Ryan found her way to Hong Kong, was subsequently bought by a Norwegian pilot who, 40 years ago, sold her to an American military pilot who, after a thorough renovation, flew her up to 2002. We succeeded in buying the aircraft in November 2002, with the help of the Prince Bernhard Fund, the VSB Fund, the Royal Netherlands Air Force and Martinair. The latter company furnished the means for transportation from the United States to the Netherlands.

More than anything else, the sensation of flying is one of perfect peace mingled with an excitement that strains every nerve to the utmost — if you can conceive of such a combination.

The art of flying and I have grown up together. I was constructing aircraft even before I had seen one fly; that was in 1910. I only started to construct aeroplanes because there seemed to be no one designing exactly the machine I wanted. Without the help of others I learned to fly it. But I never became a hero.

It is as though horror has frozen the blood in my veins, paralyzed my arms, and torn all thought from my brain with the swipe of a paw. I sit there, flying on, and continue to stare, as though mesmerised, at the Caudron on my left

The Royal Netherlands Air Force Historic Flight aims to restore, maintain and preserve a fleet of airworthy planes, all formerly used by the Dutch Air Force.